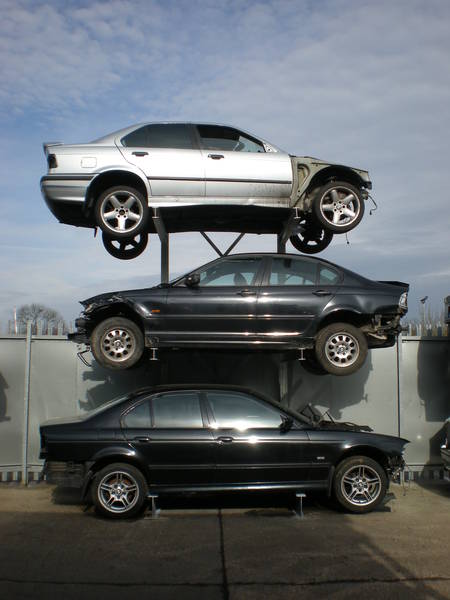 Specialist car dismantlers A1 BMW purchased a new yard in Stevenage and were looking to greatly modernise their business. As they specialised in a high value make of car, it was very important to them that these were stored in a way that prevented accidental damage. It was also important that they used the space they had in a very efficient way as there was no room for further expansion.

Ed Aloudiy, the owner of the business, needed a company to look after all aspects of the car storage and contacted Wickens after being

referred by another dismantlers who had recently purchased a similar system. “I needed someone to come in and sort out the problem in one hit. Wickens did just that” said Ed.

Having completed a full detailed site survey, Wickens produced a layout drawing which maximised the number of racks that could go in the yard. Once Ed was happy with this the racks were made, delivered and installed inside three weeks. “The installation team were excellent, working with us erecting racks whilst we moved cars straight onto the one’s they had just finished! It was all done in a day”

Ed was extremely impressed by the quality of the car storage rack. “I had no doubt at all having seen them that the racks would hold even the largest BMW”.

Also, the local arm height adjustability allowed larger cars to be stored on the base level with smaller models being held on the

higher levels. “We can now get at any car quickly and efficiently which is great for us and our customers. It’s by far the best money I’ve spent on the yard”.